Jump to Latest
E-Muscle
Dodge has opened the order process for "Last Call" Edition versions of the Charger and Challenger. It includes a total of 7 special editions. 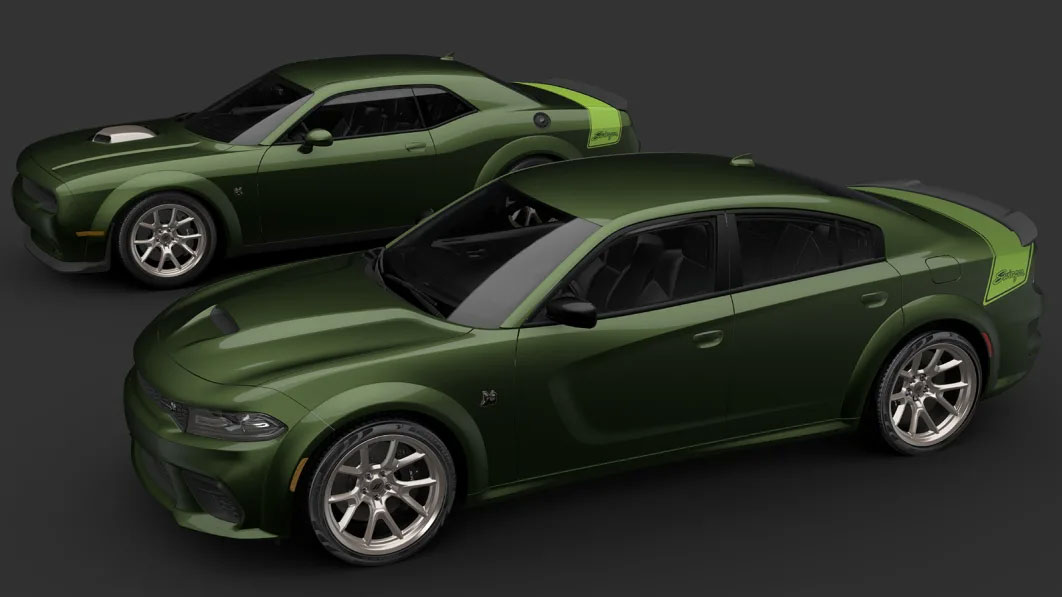 For those that want one (or two), getting a 2023 Dodge Charger or 2023 Dodge Challenger "Last Call" Edition will be neither easy nor cheap.

www.autoblog.com
For those that want one (or two), getting a 2023 Dodge Charger or 2023 Dodge Challenger "Last Call" Edition will be neither easy nor cheap. So far, the group counts six members, the Challenger and Charger Scat Pack Swinger, Challenger Black Ghost, Challenger Shakedown, Charger King Daytona, Charger Super Bee. A seventh is waiting to be announced once the industrial conditions are right. In return for the struggles the horsepower faithful will endure, Dodge wants the buying process to be a little more transparent. For every 2023 Charger and Challenger, from base SXT to each Last Call, the automaker will post all dealer allocations on the Dodge Horsepower Locator page at the Dodge Garage site. Shoppers will be able to search every dealership in the country by zip code for the model and trim they want, and see how many of that car are left in a dealer's allocation.

True, dealerships make deals with other dealers to move cars around, but at least buyers will have the factory starting point for what is supposed to go where. Speaking of inventory, that is different than allocations. Inventory is what's sitting on a dealer's lot, accessed as usual by the inventory locator tool on Dodge's retail site. Allocations are the vehicles Dodge has made available to each dealer to order. The automaker says the allocation numbers for almost all 2023 production have been established for its dealer body. Allocations for the Last Call cars will be based on a dealer' sales volume of Challengers and Chargers; the top 200 dealers by sales will get 12 Last Calls, dealers ranked 201 to 300 will get ten, dealers ranked 301 to 500 will get six.

Dodge CEO Tim Kuniskis said, "We have yet to find an allocation methodology that satisfies everyone. Our new ‘Last Call’ Horsepower Locator isn't going to satisfy everyone either, but it's our attempt to take the mystery out of it."

MSRPs for the Last Calls including the $1,595 destination charge are:
There's one more big treat for the 2023 cars, Dodge designating all the year's Challenger and Charger SRT Hellcat and SRT Hellcat Redeye vehicles that aren't Last Calls as Jailbreak models, opening a wider menu of options and features to those trims.

Every 2023 Charger and Challenger model gets a commemorative, brushed aluminum "Last Call" plaque under the hood with the model's silhouette and the phrases "Designed in Auburn Hills" and "Assembled in Brampton." There will be 14 total exterior colors on offer, the modern Destroyer Gray returning, the heritage B5 Blue, Plum Crazy, and Sublime green on the list as well. Finally, the Charger and Challenger R/T models will wear new "345" badges on the fenders denoting their 345-cubic-inch Hemi engines.

Ordering is open for every trim right now. Orders will be confirmed by e-mail within 30 days, but the Horsepower Locator allocation page will be updated daily from Monday to Friday as orders are processed, "during the first few months of vehicle ordering."

MSRPs for the rest of the lineup are:

Joined 3 mo ago
·
45 Posts
The markups on the last call cars are going to be insane and wallet breaking. Also, you fully comprehend how many charger and challenger variants there are until they're all listed like this haha.
B